A downloadable software for Windows, macOS, and Linux

Crocotile 3D is a tool for creating 3d scenes with tiles. Think of it as creating 2d tilemaps with three dimensions.

Saving (over 100 tiles) and exporting is deactivated. To activate these, register a keycode at Crocotile3D.com

v.1.2.6
Change: Unregistered users can now save if the scene has 100 tiles or less (including tiles in objects). This will allow users to test the program more freely before registering.
Added: Tile spacing texture option on export.
Added: Power of two texture option on export.
Added: Tile count info at bottom of scene window.
Added: Export multiple objects (objects listed in the scene tab). To export, go to File > Export Objects.
Fix: brush/eraser tool not drawing with single clicks is now fixed.

Fixed: Zooming in and out could cause the panning to move too slow or stop completely.
Added: Ctrl+A will now select all faces in the scene if no faces or verts are selected.
Added: Ctrl+shift+A,D to select/deselect all object instances in the scene.
Changed: Pressing delete key will now also delete any object instances that are selected.
Added: If a new version is available, it will notify you when you start the program.

v.1.2.4b
Fixed: Exporting a scene that consists only of objects would misplace the first tile of the first object.

v.1.2.4
Fixed: Adjusting UVs in Active Edit mode would adjust UVs of unselected faces if their verts were selected.
Added: Merge vertices option on export.
Added: Save/Save As in File menu (moved other buttons into menu as well); File path is now stored so it will save to current document when saving, or open save as dialog box if you choose the Save As menu item.
Added: Save As key binding; ctrl+shift+s
Added: When saving, it will show brief message when save is successful. That way if you press ctrl+s to save, you will know if it has saved.
Fixed: Saving/Loading/Exporting now remembers the current directory.
Fixed: Exporting scene to .obj would fail if consisted of only instances of objects.
Change: Exported scenes with many objects will include each object as a separate group in the .obj file. This is useful if you are importing the .obj into another program and need to keep everything separated.
Added: New export option for .MTL files. This will allow you to import .obj files into other programs and have all the textures applied correctly. This will export every texture too, and the .mtl file will reference these.

v.1.2.3
Fixed: Program would become unresponsive and crash when quitting if new scene was created previously.
Fixed: Selecting vertices with the marquee would sometimes not work.
Fixed: Moving tiles that are a part of an object at the same time with tiles that are not a part of an object would move them in different directions.
Added: Crosshair arrows can now move Objects.
Added: Textures can now be double-sided by pressing number 9 on keyboard. This toggles double-sided mode on/off for the currently selected tileset. This is more of a temporary solution for those requesting the feature.

v.1.2.2
Fixed: Mouse wheel wasn't working for zooming.
Fixed: Resizing tileset would mess up UVs for objects.
Fixed: Object points would appear larger when using a lower resolution.
Added: Options to select/deselect all objects in the scene regardless of type. Accessed in the context-menu by right-clicking the 3d scene.

v.1.2.1
Added: New keybinding system. Read help file for more information and also be sure to report any bugs or issues if you find any.
Added: Ability to rotate selection clockwise/counter-clockwise when holding Shift key and pressing Q,E.
Added: Hold space in tileset tab now allows panning of the tileset if zoomed in.
Added. Option to move crosshair to an object's origin point found in an object's menu when right-clicking an instance.
Added: Rename object points except for the origin.
Added: Subdivide tiles into columns and rows.
Added: Pixel resolution and window size can be configured in the settings.
Fixed: Sometimes applying a UV to an existing tile or copying the UV from a tile would accidentally draw or erase tiles if the mouse was dragged in the process.
Fixed: Moving the origin point of a prefab object would cause issues when rotating tiles immediately afterwards.
Added: Experimental normal map and height map image generation of prefab objects, accessed by right-clicking objects in the Scene tab.

v.1.2.0b
Fixed: Scenes would fail to load prefab objects if the scene had no single tiles placed. This would prevent the scene from loading everything.

v.1.2.0
Added: Objects/prefabs can be constructed from tiles in the scene. This allows a greater control over how you can build your scene/model. You can edit one instance and see those changes occur in every other instance of the object. See the documentation for a full list of features related to Objects/prefabs, and to understand how to use them.
Added: Layers have been added as a way to organize your objects. These can be added/removed in the Scene tab of the tileset window, and objects listed can be dragged into them. You can show/hide a layer, effectively hiding/showing the objects within them as well.
Added: Combine Tilesets option in the tileset menu. Allows combining duplicate images.
Added: Skybox images are now saved and loaded with projects.
Added: Hide/show Skybox setting now gets saved in the configuration.
Fixed: Paint bucket tool would not handle contiguous mode around edge of a selection.
Fixed: Redoing the Removal of a tileset now doesn't clear the redo states.
Fixed: Issue related to undoing/redoing the loading of a tileset and copy/pasting tiles that use that tileset is now fixed.

v.1.1.0
Added: Paint tab with full set of paint tools for editing tilesets. Check documentation for details on how to use these new features.
Added: Documentation howto.html file
Change: version number to 1.1.0 due to the significant additions.
Fix: Tile uvs wouldn't be updated in tileset window when tileset was resized, or when resize was undone/redone.
Fix: Selecting a face wouldn't register if the mouse was hovering over a hidden vertex.
Fix: Hidden vertices could be dragged accidentally.
Change: Tileset images have their modified time cached. When refreshing, it checks if file has been modified after the cached time.
Added: Auto-refresh Tilesets option in the settings. Tilesets will refresh every couple of minutes if changes have been made to the image files outside of Crocotile 3d.

View more in the Changelog

Unzip to a folder, and run crocotile3d.exe to start the application. 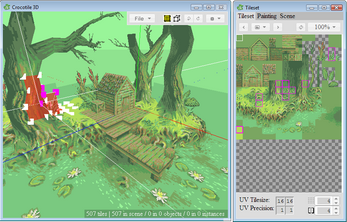